Alternative Picks from the '90s

A few days ago, I took a trip into Derby, where there is a CD shop which puts HMV to shame. I hadn't heard of That's Entertainment before I moved to Derbyshire, but apparently, there are branches in lots and lots of UK towns. They say on their website you can "choose from over 1/2 million different titles", and almost all of them seem to be stocked in Derby. It's the only place I've ever found where you can get Sonic Youth, Pavement and Elliott Smith CDs on a "3 for £5" deal, or compilations of Cuban music, ska and punk for 99p each. Sure, they're free on the net, but if you buy them in physical form, you get the reassurance of a) legality, b) a decent bitrate, and c) not getting a virus. (My latest virus came in download form from a St. Vincent track, which was a double whammy of punishment, since Annie Clark and I had had a really tense and awkward interview a few days before. If you want to see how I tried to weave one-word answers and impotent silences into a passable article, you can click here.)

Amongst my haul from That's Entertainment this time round were some seriously great albums, so I've decided to do a new-to-me music round-up. 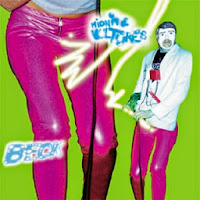 Aside from having an album cover that is the most nineties thing I have ever seen, Midnite Vultures is Beck on form (unlike the Beck of this year - in my opinion, Morning Phase is a drab and dreary record). Midnite Vultures sees Beck in his funky-technicolour-sound-alchemist guise. Beck in 1999 was playful, loud and experimental, "transcending genres as he reinvents them", as my partner puts it (ironically, I think). I was way too young in 1999 to enjoy lead single 'Sexx Laws' the first time round, but it has an eerie familiarity... perhaps it's so catchy it infiltrated my 6-year-old subconscious.

Though released in the full swing of the nineties, Elliott Smith's 1997 offering Either/Or doesn't come from the same mental space as Midnite Vultures. It's a dark and stormy record, yet it has moments of melodic brightness and lyrical optimism which seem to contradict the image Elliott Smith has gained in the media. If you don't know Smith, he's widely seen as one of music's most tragic figures - in 2003, when he was 34, he was found dead at his home with two stab wounds to the chest. The death was presumed to be a suicide, but the official autopsy report suggested it could have been a murder. The circumstances surrounding his death are uncertain to this day, and I suppose the mystery keeps people inquisitive, and listeners continue to seek evidence one way or the other in his music, particularly in the album From a Basement on the Hill (2004), a posthumous release of his last few songs. I like From a Basement on a Hill, but I've been listening more to Either/Or, which has a Bright Eyes-esque subtlety to it, though breaks into serious grunge grittiness on 'Cupid's Trick'. 'Cupid's Trick' is the music of primal revelations, especially at 0:24, when the oscillating guitar and newly invigorated bass kick in for the first time, and at 1:39, where there's one of those gorgeous imprecise guitar solos that can only be found in noise rock.

I also bought an album of Cuban music, partly because I'm learning Latin American Spanish right now (several countries there are the political equivalent of El Dorado for leftists at the moment) and partly because I think the musical tradition of Central and South America is fantastic, right through from traditional Latin dance music, jazz-tango and Tropicália to modern fusions like the music Rodrigo y Gabriela make. The Cuban album I bought is embarrassingly called The Best Cuban Album in the World... Ever!. I cringed, but I took it at its word and bought it, and it definitely has a few brilliant tracks (though I'll have to listen to every Cuban album in the world to make sure it meets the Trade Descriptions Act). 'Amor Verdadado' ('True Love') is a jaunty and uplifting song, and Machito's 'Tango' proves that a cacophony doesn't have to be unlistenable. My favourite track on the album is 'Chan Chan', a Cuban folk song about a man walking from town to town in Cuba, telling an old (and slightly raunchy) story to the people he meets. Despite liking pretty much every version, my favourite is the 'Chan Chan' recorded by the Buena Vista Social Club, so I've Youtubed that for you - it's laid-back and drenched with atmosphere, and the instrumental solos which start at 2:37 show how beautiful Cuban cadences can be.

Having written this, I realise that all of these picks are from the '90s, so I'll throw in a final gem from 1997, Belle and Sebastian's 'Dog on Wheels', a twee lo-fi classic (and it also means you get to watch a video, another distraction from whatever you're meant to be doing right now). Enjoy!