Okay, it's no secret that I love Bright Eyes. Bright Eyes fans, particularly in America, have a reputation for being hipsters, for posting on forums that Conor Oberst is "sooo cute and fragile". I don't buy into the cute and fragile thing, I think it's a bit of a façade, but there's no doubt that he is a very productive, talented and versatile songwriter.

Last week I spurned the Big 4 at Sonisphere to see Bright Eyes live, on the balcony at the HMV Institute. The band were supported by Jenny and Johnny, a melodic duo who were interesting for several songs, but faded into the background pretty quickly. Bright Eyes came on and the crowd, kind of Bohemian and only sparsely dotted with obligatory drunks, instantly cheered. It was a supportive crowd - through 'Land-Locked Blues', one of the highlights of the evening, there was cheering and intensity at every relevant pause. 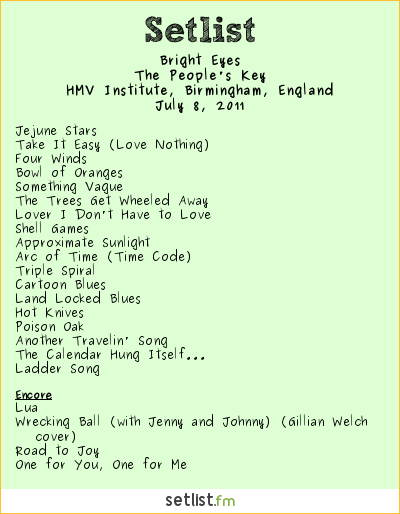 They played the above set, with songs from a range of his best albums. However, I've never known how to feel about the emotional content of Bright Eyes lyrics, and by the third or fourth song, I was pretty much decided that I didn't like it. Conor Oberst was a lot more extroverted than I expected, a lot less of a folky, the music heavier. I liked it, but the gentle persona in the singer's lyrics and the almost arrogant persona onstage seemed to contradict one another, and gave the package an aura of falseness.

By the end, though, I had changed my mind. It was one of the first times I've seen a band that really seem to feel their songs live. Conor's miming may be silly sometimes, but there isn't a syllable he sings on autopilot - he's very involved with his songs, and that makes the whole thing really dynamic. At the end, they played 'One For You, One For Me', not one of the best from The People's Key, but incredible live: Conor managed to preach peace and love without sounding like a nu-hippy, and when he hugged that front row, it really felt like he was hugging the whole audience. The artist/audience connection was electric.

If his onstage/offstage personality dichotomy is anything to go by, he is a good actor, but it still felt real. And that's the illusion of live music, live theatre, isn't it? You don't have to be completely honest to make your point.

Musically, they were fantastic, as I knew they would be, and the trumpet really added something, particularly in 'Lover I Don't Have To Love', which is one of my favourite songs. It added a lot of atmosphere, as if the gig needed more.

This was one of the best gigs I've been to in a while, mostly because it was intense and yet full of energy and passion. I may not be into the whole fragility thing that Conor Oberst has going, but I can see that he writes and sings in gold most of the time, and Bright Eyes is one of the best of his brilliant projects, bolstered by fantastic musicians and personalities in the rest of the band.
Posted by ItMustBeKate at 10:10 No comments: