Whilst I agree with The 405 that the new Bright Eyes album, The People's Key, isn't an instant classic, I disagree with the rest of the review - the lyrics are amazing, and I like the juxtapositioning of their profundity against, essentially, indie pop music. I think it makes depth more palatable - especially if dirges are the usual backdrops for lyrical darkness or intensity.

My favourite track by a mile is 'Approximate Sunlight', at the moment. It's minimalist, interjections of sound and a metronome-beat ticking holding the background together, but the lyrics the masterpiece. It's a social comment, an introspective poem, a song about disillusion and the worn-out incessance of time. I really think Conor Oberst does the meaningful, slow tracks better than ever before these days (listen to Cassadaga's 'Lime Tree' for confirmation, although Fevers and Mirrors still rules OK with 'Arienette'.)

Posted by ItMustBeKate at 16:23 No comments:

A Couple of Realisations

I googled J Mascis a few days ago, when I received his new album to review, to see if I could find out a little bit about him. I did: I found his website, which, being a lazy soul, I skim-read without clicking away from the home page. And so I started reviewing. Reviewing blind.

Taken by the eloquence and simple honesty of the album, I had a closer look at his website tonight. Not until I clicked "Bio" did I realise I was reviewing the lead singer of world-reknowned early US indie band Dinosaur Jr., one of those bands of which I know I should have a broader knowledge.

It was one of those moments that proves, rather cruelly, that I listen to critically acclaimed artists differently. Because that inoffensive Americana became a Hell of a lot more interesting the moment I'd read the name 'Dinosaur Jr'. I don't know why: perhaps it's natural to bow to the status, to the greater knowledge of aged critics who have a consensus on a band's brilliance. Perhaps. Or perhaps it's respect for someone who has stayed in the business, a success story. I don't like the idea that my views are affected by fame, because it messes with objectivity, but what can you do except not read Bio pages? And you'd be criticised for that. It's the same with massive bands like Radiohead - how can you listen to that impartially?

Also, incidentally, I walked past John Lydon, AKA Johnny Rotten of the Sex Pistols yesterday in Birmingham. Flanked by two men in black suits, he looked utterly silly in a mustard-ish beige get-up; I looked remiss at his costume before I realised I was staring at the lead singer of a band who have 89 plays in my last.fm library... 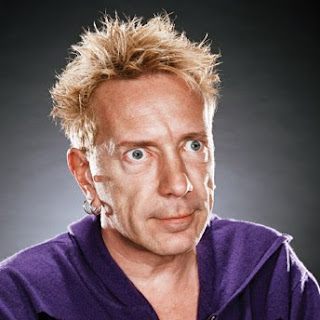 It strikes me that the only thing that prevents these stars from being 'real' people, unrecognisable in the street, is that they so often try to attract attention - ridiculous yellow outfit and bodyguards? It seems desperate to me. Not to offend massive Lydon fans; he's just difficult to respect for his clawing to be in the spotlight.

I said to my boyfriend, "We just walked past Johnny Rotten."
Jozef, hardly a fan, replied, "Oh, was that who he was?"
Posted by ItMustBeKate at 11:33 No comments: