At the risk of invoking a feminist-induced roll-eyes (as goes with the anti-feminist stance so popular in our modern media), I'm not comfortable with most music videos because of the women in them. There isn't a genre which releases singles which is above the sexualisation of women in their videos. Before you stop reading, just consider the last time you turned on music TV, or have a try now - sit there for a half hour, or flick through the channels, and record how many of the videos feature these things:

• Numerous women dancing around or in front of a singular male, or a small group of males 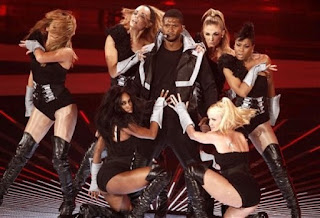 You may come across a couple of videos without these things, but my own personal (admittedly confirmational) scan through the channels suggests it's rare, even in genres not usually reknowned for their sexism. And of course, videos differ in the level to which they use the depersonalised female body - but it's there alright, most of the time.

Anyway, I initially went on for another 4 paragraphs about why this is a bad thing, but I don't think it'd win any converts - you either get what I mean or you think it's all harmless, a bit of fun. I'm a killjoy, a jealous bitch even. I've heard it before. They're two fundamentally different stances, sure, and I'll grant that on a good day, I can sit through one of those videos emotionlessly and know that plenty of people do the same, desensitised to the images they're presented with. But I am a great believer in the idea that things seep into our psyche; we don't always see that what's 'normal' to us is not actually the only path, the only way the world could be. Music videos show a world of ideals, but those are NOT biological ideals. They are cultural ideals, and therefore, they could easily be re-shaped. They're only showing 80%-naked girls and half-dressed guys because they're perpetuating our media's images, and our media's images are there because being thin, tanned, made-up, well-dressed down to the underwear, shaven, perfumed and bejewelled is the most expensive way to live, and our media is based on advertising. Simple as that. (Well, almost...)

All this has, tangentially enough, been leading up to a discussion of No Doubt. I always used to see Gwen Stefani as another sugar-pop princess, with slightly better music, because I saw her having an interview on Channel 4 a long time ago and she appeared pretty vacuous. It was definitely a cruel assessment, I know that now, but the pretty costumes, blonde bombshell haircut and heavy make-up don't do her music justice, really. I was too used to pop producing mindless music by women who were just a front, lip-syncing, taking pin-up girl photos and grinding the camera in videos. Therefore, when I watched 'Just A Girl', it was a very pleasant surprise. The lyrics mean srsbsns, and she's got a srsbsns voice to go with them.

I hope no-one missed the sarcasm. I think it's pretty blatant but it was released in America. (No offence, Americans, but your Bible Belt makes us all lol over here in the UK.)

"I'm just a girl, Take a good look at me Just your typical prototype...

Posted by ItMustBeKate at 13:38 No comments:

I've probably mentioned Tropicalia before, but if I haven't, now's as good a time as any. I was working today and I stuck my iPod on, and decided it was time for some 'random world music', as my boss put it. Tropicalia was a great movement of the cultural revolution - in Brazil. Unfortunately, the regime at the time wasn't up for a cultural revolution, so the history of Tropicalia is incredibly political, littered with attempts at oppression. It's freedom music, combining traditional South American instrumentation, language and rhythms with decidedly beat-pop-esque songs, 60s guitars and harmonies. Not only that, it also manages to have an intro that sounds like Duffy, yet pre-dates her by several decades. Have some glorious start-of-summer listening!
Posted by ItMustBeKate at 10:28 No comments: