What Makes Us Love Stealing Music?

Walking through a crowd of people a few weeks ago, my friend and I were discussing illegal downloading. "It is a crime!" she cried, far too loudly, and a couple of gatherings of people turned to eye us curiously. "You may not like it, but it's stealing, like going into a shop and taking a CD, but people don't care because there aren't the same consequences."

I nodded despondently. Faced with such an argument, it's very hard to disagree that illegal downloading is a bad thing. And for most of us, it isn't just about consequences: there is a moral framework in place in most of our minds which tells us stealing is wrong, according to principles of property ownership that we live by. So why does downloading music for free not feel particularly wrong? 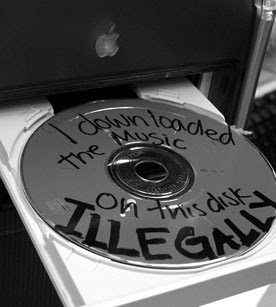 Maybe it's because it counts to us among the many services that the internet offers: we can read The Guardian online without paying for a hard copy, same with most newspapers; we can watch music on Youtube, so what's the difference between that and having it on our hard drive? It's a blurry line, definitely. Especially when we go on to love the music, to listen to it all the time: we have a feeling of warmth towards the artist, and respect them, which feels like a kind of payment for the albums.

Then there's the idea that most of an artist's money comes from the gigs anyway. I'm sure it's true that they're one of the most profitable sections of a big band's income, but it would be wrong to think that this renders paying for albums and singles obsolete.

Of course, we also see bands like Radiohead distributing digital copies of their albums for free and we think, "see, it can't be that important for artists to get paid for MP3s!" But Radiohead have, as it stands, 259,682,938 plays on Last.fm - they're one of the most listened to bands in the world. The story is not the same for smaller artists.

We can all see from the shrinking music sections of what are, traditionally, CD shops, and the vast numbers of torrent and free MP3 sites that music isn't dying, it's just moved. It's not a shrinking business, it's just a failing one: what would happen if a huge free chocolate stall set up shop outside Thornton's? Music is getting freer, easier to access, and that's amazing - but in the end, it might just kill itself, because that band that sell half the number of albums they could have can't afford to make their next album. Reuben are a brilliant example - "dropped by their label 'cause they can't pay it back".

Reuben - 'Return of the Jedi'

"I'd like a job in which I'm able,
To put shoes on my feet, and food on my table,
Those nine-to-fivers, they look pretty stable,
But I get my wages from my record label."


One final aside: someone is benefitting from all this illegal downloading. The illegal downloading sites' owners, who get paid for advertising and some even for subscriptions. So, not only are you 'stealing', as my friend would insist, you're also funding criminals.

It would be great if music, as a source of joy and passion, could be free. But it isn't. And until then, the onus is on us to pay for it, or feel guilty - I think I can predict which one most of us will choose.
Posted by ItMustBeKate at 12:24 2 comments: