Growing up in the Midlands, if I spend any amount of time in a local town at all, I leave disappointed. The Midlands is the county of litter, obesity and unemployment. Wolverhampton, however, has escaped the fate of being Just Another Horrible Image in my Youth through its three popular music venues: The Civic Hall, The Wulfrun Hall and The Little Civic (RIP, you were one of my favourites.) Last Monday saw another great gig at The Civic Hall - Franz Ferdinand.

The band spent time before the gig wandering round Wolves, being stalked by my mildly obsessive friend, and airing the bands' families. Doors opened at 7, and support came on at about 8. Music Go Music, they were called - a band name considerably worse than their music. They launched into a revamp of the classical classic 'In the Hall of the Mountain King' by Grieg (a song which soundtracked my two-year-old nightmares, and is more commonly known as 'that Alton Towers music'.) Everyone wanted to know more by then, hyped up by amusement, and a stick-thin female singer appeared onstage. Their next few tracks were well-played, well-sung, up-tempo pop tunes, with a rock edge. It was retro, but with a modern edge: I liked it very much, though it got a little samey throughout.

I did like the moment when someone shouted something undoubtedly sexist from the crowd, more than a pet peeve of mine, and the lead singer, apparently called 'Gala Bell', said "I'm sorry, what was that?", and another man called "You don't wanna know." Thumbs up, whoever you were.

Anyway, Franz Ferdinand only have one support it seems, so the band we were waiting for was on at about five past nine, playing a visual, energetic set, with covers and past B-sides, until ten. They went through their very entertaining art-school moves, even after all these years seeming to be enjoying themselves more than the crowd. The encore was quite long, started with Paul the drummer slinging his shirt off like a man possessed, the band finishing their onstage glasses of wine, and Alex giving the crowd even more sultry eyes than usual, through his new fringe.

Here's what they played: 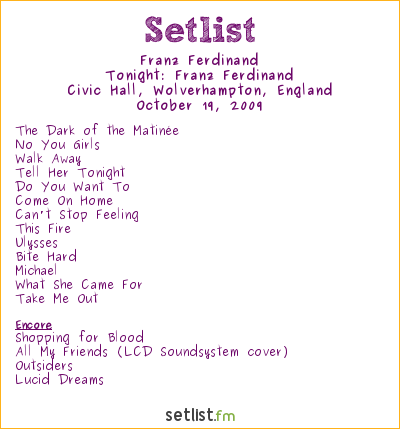 Don't ask me what The Scottish Song was. I have no idea.

Again, a great gig, though I got a little bored during the last two songs. Despite their brilliance, both of the extended endings went on a little long - one of the two tracks would have been better. The throwing of the drumsticks was a ritual made more fun though - Alex leaned forward and threw it to my friend, who he knew is an Excitable Fan, but she didn't get it; on seeing this, he threw the second one specifically at her too, which she did get. He has her hooked for life now, no escape.

Because of my friend, we hung around for a while afterwards, but they'd apparently left the moment the gig had finished, so there was no meeting them. I just wanted to get home at that point though, despite how much fun I'd had in the gig. Singing along to Franz turbo riffs is tiring work, especially when they stick 'Ulysses', 'Bite Hard' and 'Michael' one after the other.

Selling signed vinyls and limited edition CDs before a gig is such a Cribs thing to do. Every step of the way, the Cribs have been a live band in touch with what their fans want - amps turned 'up to 11', good music and lots and lots of memorabilia. I got myself a signed CD and a Cribs shirt, and then nestled into the young crowd at the front, taking in the awesome OTT decoration of The Assembly at Leamington Spa - golden orgies of cherubs against massive blue walls next to classical balustrades and art deco stained-glass windows. A very atmospheric and original venue to say the least, although impossible to get out of due to millions of flights of stairs.

The first band on were the Cribs' compatriots and friends Shrag. I liked them - they really did resemble Comet Gain - but the female singers had broken glass voices which began to get on the nerves after few songs. The music behind them was repetitive but enjoyable pop-noise. If that makes any sense at all.

Adam Green was next. What a riot. Whatever Adam Green was on, be it ecstasy, red bull or just life, it made him manic, running about and dancing, and therefore impossible to photograph. He came into the crowd... five times? And each time he threw himself in and got carried so far back that no more arms were available to carry him. The music was better than I'd expected - lots of guitar noise, super-speed drumming and hilarious lyrics. Adam Green. Perfect support, he got us all laughing and clapping along, and dedicated Superstar Blues to Queen Victoria.

The Cribs. Kate Nash watched from the sidelines, and the supports were lured out to the sides to join her as the noise started up. They played a selection from all of their albums, although the two most recent had the most focus. Setlist: 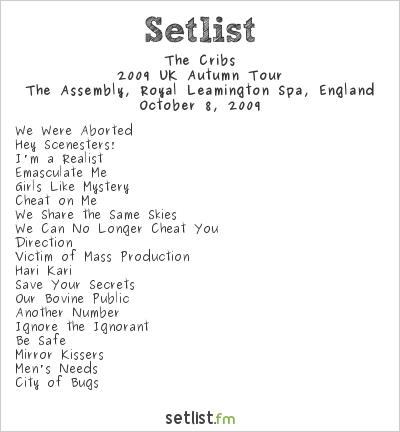 The highlights of the night for me were: Hey Scenesters! because it's always a mass sing-along, mass bop-along track; Another Number for the most singable riff in history, and the fact that it's such a classic, not a person in the venue wasn't soaring on its simplicity by the end; Be Safe because Lee Ranaldo of Sonic Youth was speaking his wonderful monologue on a projection on the back wall, and because it's Be Safe; and City of Bugs, the final song, which ended in a cacophony of noise with all four members of the Cribs doing something detrimental to their instruments, and Adam Green dancing at the side.

Great gig - it's a shame that Cribs don't do encores but that's the way it is. Nice venue, good crowd, wonderful music. It's the best way to spend an evening.