It's been a while since my last post; I've been enjoying the summer for reasons other than music, which is a surprise even to me. Since I last wrote, I've done several musical things, like go to metal fest Sonisphere, get into Bright Eyes, and reboot my dead iTunes.

The most important of those being Sonisphere. 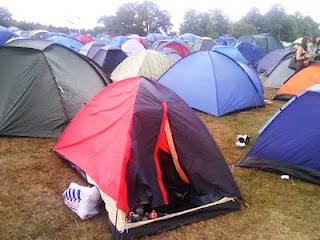 On July 30th, I went to Sonisphere with my boyfriend. If you read any of the posts below, you'll know that metal is not really my favourite genre. I was definitely one of the girlfriends there whose sole purpose was to keep the tent warm - I made myself enjoy it anyway. I only saw a handful of bands: when most of the names are unfamiliar to you, you never quite know where to go.

We caught a few minutes of Gary Numan and Europe on the Friday night, and that was all. For the rest of the time, we explored the campsite and arena. Large numbers of men in tutus and girls in Newrocks wandered the fields, graffiting the much adored 'Pantera' on tents and queuing for portaloos, whose scent defined my weekend.

Alice Cooper was the best on the Friday night. Onto the Saturn Stage he strutted as the sun went down, dressed ridiculously with a myriad of wrinkles criss-crossing his face; he launched into 'School's Out', and the crowd's mixture of amusement and adulation added to the great atmosphere. From there, Alice proceeded to die onstage about five times, kill various hideously made-up humans and sing over his few-chord showman's punk. It was fun, and very tiring. 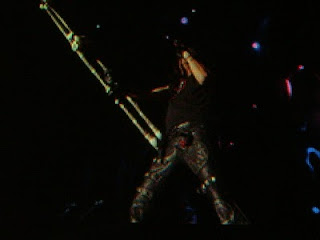 The first night was soundtracked by random cheers which spread across the campsite like mexican waves, skanky people talking and smoking shit, and the calls and jeers of drunken insomniacs. 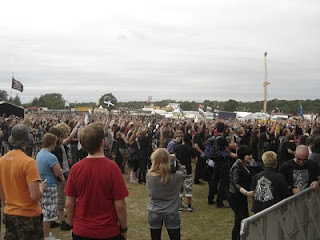 On Saturday, we saw Family Force 5 on the Apollo Stage in the morning. They are incredibly scene, described by the term 'Christian Crunkcore' (?) and talking a lot about dancing. And dancing. Wearing lots of leather. That day we also saw Andrew O' Neill in the comedy tent, who definitely topped Tim Minchin, the act he was opening for. Rammstein finished the evening. I've never seen the deal with Rammstein: it's dull to me, repetitive and humourless. I enjoyed the stage show - fire, fire and more fire - but I wasn't particularly bothered when they went off early. A beachball ricocheting off a bald man's head and a mass singalong of 'Du Hast' were my highlights of the set.

On Sunday, my day started badly when my boyfriend's uncle arrived early and had to go back home, meaning we thought we were going to have to get the train home. Not having washed for two days, this seemed a harrowing sentence, so we didn't enjoy the morning. Finally, it was agreed he'd come back in the evening, so we were free to enjoy the empowering reggae metal of Skindred, who were bested only by Alice Cooper's set. Later on, we saw Kylesa, a hard punk band who headlined the Jaegermeister Stage, then Pendulum, and ultimately, Iron Maiden.

All weekend, girls had been baring their breasts to big screens, but it got stupid during Pendulum. There were so many incidents of chest-exposure that even the laddish men in the crowd stopped cheering, and it became a bored expectation of the women on camera. I got pissed off by the misogyny and it ruined Pendulum for me. We went for a wander before Iron Maiden, immersing ourselves in the atmosphere of all the expensive food tents, the legal highs tents, then spending too much on the 10p machines at the amusement arcade. 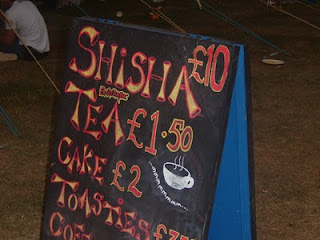 Iggy Pop was weak. He looked even more decrepit on stage than Alice Cooper had, but unlike Cooper's, the show was without fun, and unless you were in the pit, a mere irritation en route to Iron Maiden. They were also disappointing, for me. Rammstein had burned things. Alice Cooper had died. Iron Maiden didn't do anything fun which a less-metal fan could watch, Bruce Dickinson just talked in clichés before playing the songs, straight. 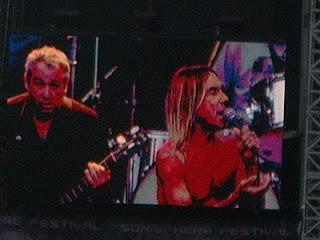 I think the crowd enjoyed it, though. It's just not my taste. My boyfriend didn't much care for their setlist either however, so we left early and packed up to go home.

And that was Sonisphere. On the journey home, sleeping on Jozef in the car, I had a heavy rock band playing invented songs in my ears, vaguely Metallica, and they didn't go away for days. We were exhausted and disgustingly unwashed, but happy. Very happy. It was my first festival, and I've discovered the charm of a permanent hum of music, overheard comments ("Slayer were amazing. I love my cock."), and nighttime fairgrounds lighting up littered fields. 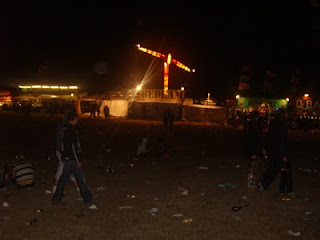 Posted by ItMustBeKate at 08:04 No comments: