If you want to know how Conor Oberst feels about politics and all sorts of other Big Questions (which let's face it, you all do...), don't look to Bright Eyes or his solo stuff, because that's mostly love and darkness, and don't look to Monsters of Folk, because that's mostly co-written. Look to Desaparecidos - ten years old now, but recently reformed for a one off show, so I understand. Even their name means 'people who have been disappeared', simply - victims of politically motivated imprisonment or murder.

Oberst is quite versatile, it seems: he's done stuff that others have called 'emo', as well as folk, soul, rock. I'd call Desaparecidos rather raucous punk. Have a video.

Posted by ItMustBeKate at 15:34 No comments:


Last night, I was listening to my last.fm Recommendations, which are stunningly accurate, and found Vex Red. (Last.fm draws a picture of me so dangerously close to the reality that I hope it's not possible to do that with things like my purchases, or I'll be a sucker for targeted advertising for the rest of my life.) 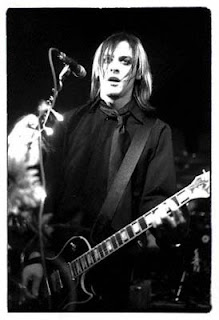 Vex Red are a hardcore/electronica band from Aldershot. Or should I say, they were. Just before I had my ear properly in music, a whole wave of '-core' suffix bands were around, before the '-core' suffixing got silly ('Christian crunkcore'?! 'Happy hardcore'?!). In their wake surfaced the recent pop-punk scene. My problem with most of it was that it was over-polished and slick, and almost unfalteringly self-pitying. The singers in pop-punk drawl and cry, and it's unlistenable. The sound of that 00s misery is inseparable in my mind from MySpace and eyeliner and pictures of fringed kids with '<3's in their names, taken from above.

Anyway, that's getting off track - basically, I could stomach only a few of those bands, but some revolutionised my listening habits. Reuben are the most notable, because I still love them - instead of the usual slick production and wailing, they were versatile, particularly in the vocals. Vex Red have the same advantage. Although Terry Abbott doesn't quite have Jamie Lenman's voice, they have a raw edge which gives two fingers to the studio gloss of Madina-Lake-type groups.


But yes, they're gone. Like most music, they're yesterday's news, and they only made a couple of albums. Terry Abbott formed another band, Septembre, in 2002, who soon went on hiatus after the bass player was involved in a car crash. Septembre are also pretty awesome. I've made you a nice widget so you can have a listen and see what I mean about this songwriter, who, if it weren't for last.fm, would probably be only a memory, and definitely not one of mine.

Posted by ItMustBeKate at 06:44 No comments: