I'm sure I could write a much longer article on the brilliance of the Youtube phenomenon Brett Domino, but I think that will inevitably follow the release of his album in March, so I'll leave it until then to discuss such things.

For now, I think you should all read the hilarious interview I did with him around Christmas, found below on The 405, and enjoy the wonders of a pop-parody act that can truly do it all.

Rocco La Bête Interview
Posted by ItMustBeKate at 16:09 No comments:

Twenty-five years ago, Phil Lynott, the lead singer of hard rock band Thin Lizzy and a proud Irishman (even if he was born in West Bromwich), died. Drink and drugs, the usual story. I can't say I was there from the beginning, I wasn't born. However, I was there from last year, and I have to say, now their ex-guitarist Gary Moore has died too, it seems to be a good time to write something about them. Something for them. 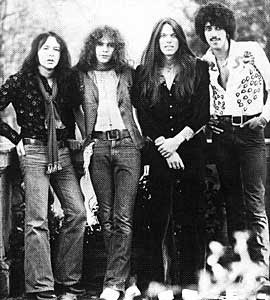 Phil Lynott was not only a great songwriter ('Dancing in the Moonlight', anyone?), he was also a stunningly expressive singer. Thin Lizzy's biggest hit, 'The Boys Are Back in Town', is not the best show of Lynott's mesmerising vocals, but their 13 album back catalogue contains plenty of documentation of his talent. Then the guitarists, of course. Gary Moore, though only with Thin Lizzy in patches, played breathtaking solos which guitarists have aspired to for decades. He died a few days ago from a heart attack in a hotel room, a haunt where so many stars die.

From the BBC4 documentary I saw on the band, they were a shambles, band members leaving and joining, each of them chaotically slipping in and out of consciousness... paralysis... The creative process came irritatingly naturally to them, whether they were shackled by their addictions or not. They were infamously good live, loved for their performances' energy and crowd interaction.

It's a little disconcerting to think that the leading figures of youthful movements like the early hard rock movement are of an age to be dying now. When they were young, it seemed natural that these stars could live forever. A rockstar is not a person, it is an idol and a symbol: the power of revolution, exuberant change, like Che Guevara on a T-shirt. So it hits hard when they start dying. It makes me feel more mortal, and I'm sure it makes the original fans, never natural Saga Radio listeners, feel like their youth is disappearing behind them.