It's been ages since I went to a proper gig. Too long. The last concert I went to was Kerry Ellis and Brian May at the Royal Albert Hall, and I was planning to write it up on here, but it was so self-indulgent, I couldn't get complimentary words together. Not that it wasn't well-played, well put together... but it began with an hour of songs from musical theatre (?!), and it was for charity, meaning that the unpaid performers tried to drop their own names in often enough to make up, in self-promotion, for their lack of earning that night. Brian May was legendary, Kerry Ellis was talented, but it all felt a little too glamorous to be a gig. It was a concert.

So, a proper gig. Compared to the ornate ostentatiousness of the Royal Albert Hall, the momentousness of 100 mile motorway drives and £50, this ten pound gig could have been seen as a 'step down', but it really wasn't for me. Opening it were some hipsters from London, dancing around as if to a much bigger audience, but I guess you have to start somewhere. (Perhaps it's wiser to start by publicising your name, but okay.)

Following these were The Neat, a band from Hull who sounded like Sonic Youth in all but their vocals, which were more like Vampire Weekend's caws and calls. It wasn't unpleasant, but repetitive, and oddly out of place opening for Young Knives. When finally they did come on, it was to a small crowd of generally geeky early twenties blokes, all of whom clearly identify with their future selves on stage. 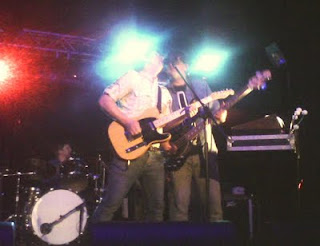 Young Knives were hilarious, as well as captivating in their performance. I found myself maniacally smiling throughout most of the songs, caught by every witty turn of phrase in their lyrics, with their between-song jokes lingering in my memory as they churned out the energetic, angular riffs they're famous for.

Well, I say famous. As Henry said, "Here's our last single 'Love My Name', which we hoped would make us incredibly rich. We thought it could rival the Kings of Leons and Coldplays of this world."

"I want a sports car," House of Lords added.

"Yes, unfortunately we discovered that to get that big, you have to be really boring."

It's true. There was never a dull moment, never dull enough to melt into the background that so many people seem resigned to being part of anyway. The highlight was definitely 'Hot Summer (Weekends and Bleak Days)', partly because they were so chuffed to play it ("this is our favourite song to play, because it reminds us of when we were young. And handsome.") and because we were chuffed to hear it ("thank you. We're glad you like that one. We really need you.")

A good night was had by all, I reckon, even if the new Academy 2 is a bit generic.
Posted by ItMustBeKate at 16:14 No comments: